The History of Calderwood Realty

Calderwood Realty can actually trace its roots all of the way back to the existence of Smithers. In 1914 the first real estate business was started by W.S. Henry & Dunlop who were agents for Rattenbury Lands.
In 1929 the business was then sold to Lambert Kenney and L.H. Kenney Real Estate was started. In 1939 R.W. Calderwood Agencies Ltd was born when Roy William Calderwood purchased the business.

Originally R.W. Calderwood Agencies didn’t just sell real estate it also sold insurance, & was a public notary. Back in 1939 real estate was only a very small part of the business. Roy ran Calderwood Agencies until he passed away in 1953. The business was then taken over by Roy’s wife Marge Calderwood. Marge was originally a trained nurse but unfortunately had contracted polio and was no longer able to work as one. She became a notary, and also looked after both insurance and real estate.

In 1977 Charlie Northrup got his real estate license and started selling for Calderwood Agencies with Marge Calderwood.

In 1979 Charlie got his Brokers license and became partners with Marge by purchasing half of Calderwood Realty. Marge Calderwood retired from Real Estate in 1986 and at that time David Mio purchased Marge’s half of the business. For the next two decades Charlie and David successfully ran Calderwood Realty “the hometown team” as the premiere real estate company in Smithers.
n 2007 Charlie Northrup and David Mio sold the business to John Butler. John Butler has a long history of being both a Realtor and appraiser in the Bulkley Valley. John had owned and operated previous real estate companies in the past, but found the prospect of owning Calderwood Realty to be an appealing one.

In 2007 DJ Mio (David Mio's son) became a licensed Realtor and was able to work with his dad for almost a year before David retired. That time and experience was invaluable as there is such a steep learning curve when jumping into real estate.

In 2015 DJ received his Managing Brokers license. It became clear that John was considering slowing down and eventually would be ready to sell the business. After much thought and deliberation, DJ & his wife Jennifer made a proposal to John in 2020 to purchase the company. DJ & John have always had deep respect for each other, which made the decision and business transfer very smooth. DJ & Jennifer are extremely proud of the deep history that Calderwood has in this community. Upholding the legacy as a trustworthy, reliable, hardworking real estate office is of utmost importance to them.

The History of Our Building

Even though the location of Calderwood's has never changed there have now been 3 different buildings at 1175 Main Street. The first building was already an old building when Roy Calderwood purchased it in 1939.
The Calderwood family can remember having to step down off of the street to enter into the building. 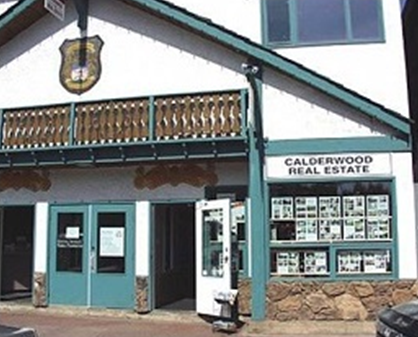